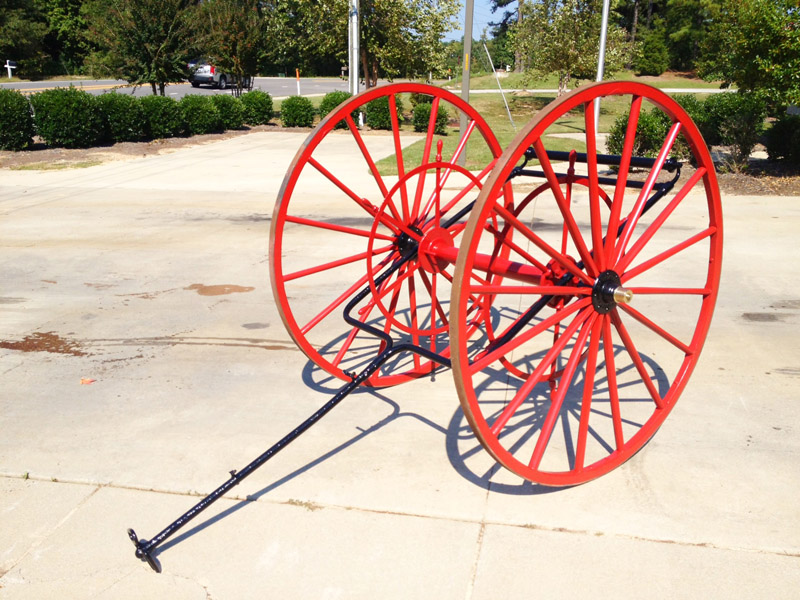 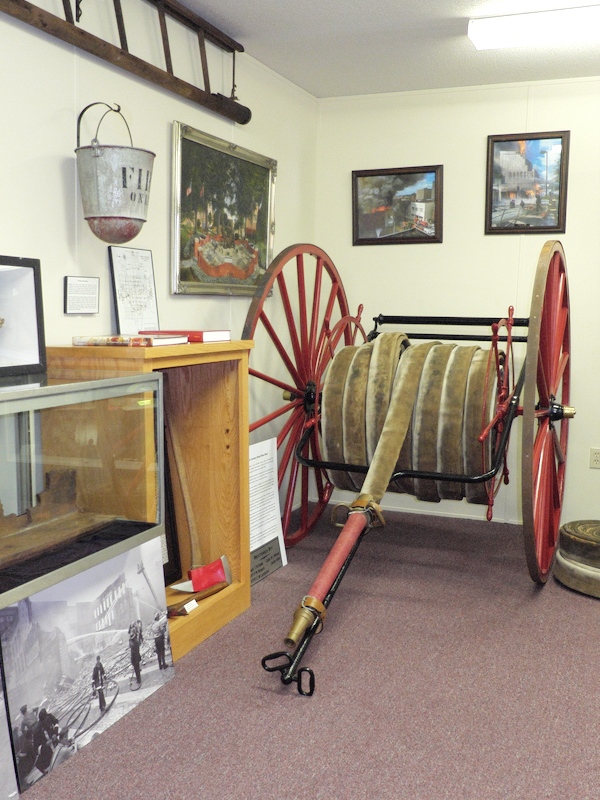 In November 2012, a newly restored nineteenth century hand hose reel was unveiled at the Raleigh Fireman’s Ball at the Raleigh Convention Center. The private event capped a year of celebrations for the Raleigh Fire Department, which celebrated its 100th anniversary as a career fire department this year.

The hand reel was stored in the basement of Station 8 on Western Boulevard for a number of decades. It was disassembled during storage, and the frame and wheels were suspended from the ceiling. They were later moved to a storage building behind the station.

Early in 2012, the wheels were sent to Lancaster County, PA, to be rebuilt by Amish craftsmen. The Raleigh Fire Museum paid for the repairs. Upon its return, the hose reel was restored by Captain T. N. Duke, Captain N. L. Murray, Senior Firefighter P. M. Rogers, First Class Firefighter C. W. Langston, and Junior Allen. They donated their time and materials.

This hand-pulled hose reel dates to the nineteenth century, when the Raleigh Fire Department was comprised of volunteer fire companies. Hose for both hand lines and supply lines was carried to fires using two-wheeled, hand-drawn “reels.” The Rescue Company Steam Fire Engine company, for example, had a hand reel along with its 1870 Gould steamer. The steamer carried its own suction hose. The reel was pulled behind the horse-drawn apparatus, either by hand or towed by the engine.

In 1887, the first fire hydrants were installed in Raleigh. The volunteer firemen could connect their hose lines directly to the hydrants. No pumping engines were required. New fire companies formed, with apparatus consisting solely of a hand-drawn hose reel. These companies included the Capital Hose Company and the Independent Hose Company.

Hose reels were developed for metal-riveted leather hose, which was difficult to roll or fold. It required a lot of maintenance, including the application of oils. Cotton-jacketed rubber hose, developed in the late eighties, was more flexible and could be packed on a flat plane. It would develop mildew and rot when wound on traditional hose reels.

In the 1890s, hose wagons began replacing hose reels in the Raleigh Fire Department. The bed was ventilated, with wooden slats on the bottom and sides. Water could easily drain, and air could easily enter. The hose wagons were horse-drawn, and used until replaced by motor apparatus after the organization of the career fire department in 1912.

Hand hose reels were also used in the nineteenth century in Raleigh by institutions and private fire departments, including at Dorothea Dix Hospital, North Carolina College of Agriculture and Mechanical Arts, and Saint Augustine’s College.