You are here: Home / News / Obituary for Butch Munns 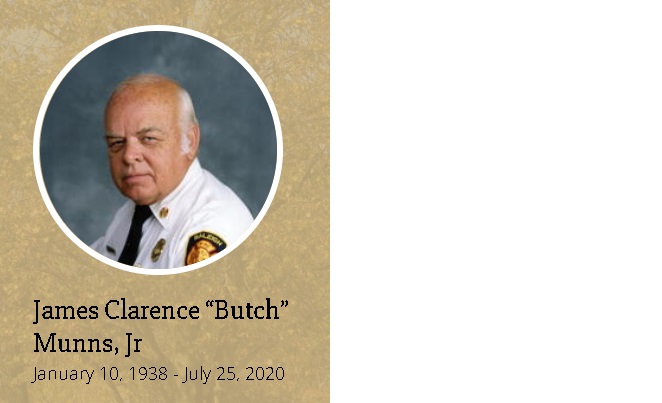 At the family’s request, there was no public service. Here’s his obituary from http://cremationsocietync.com/resource/obituaries/

James Clarence “Butch” Munns, Jr. was born at Rex Hospital in Raleigh, NC January 10, 1938 to James C. “Jake” Munns, Sr. and Elizabeth Chapen Munns. The hospital statement of account showed a total charge for the eight-day stay of $47.95. He was the oldest of eight children. After graduation from Needham Broughton High School in 1956, he joined the Navy and served aboard the air-craft carrier, USS Saratoga. When discharged, Butch was hired in to the Raleigh Fire Department.

He and Sandra Walker Perez were married November 20, 1961 and lived in Raleigh and Garner until he retired from the Fire Department with the rank of Captain after serving 37 years. Butch and Sandra moved to Pine Knoll Shores, NC January 2000 where he enjoyed many hours of fishing and boating.

Surviving is his wife of 59 years, Sandra, along with three sons, Kent Perez (Kristie) Kevin Perez (Ann) and Michael Munns and four grand-children, Charlie, Cody, Kayla and Maria. He also leaves three sisters and two brothers. He was preceded in death by his parents, one brother and one sister.

At the family’s request there will be no public service. In lieu of flowers, donations may be made to The American Red Cross, 35 Shoreline Drive, New Bern, NC, 28563 or The Salvation Army, P.O. Box 399, Morehead City, NC 28557. Condolences may be shared at CremationSocietyNC.com